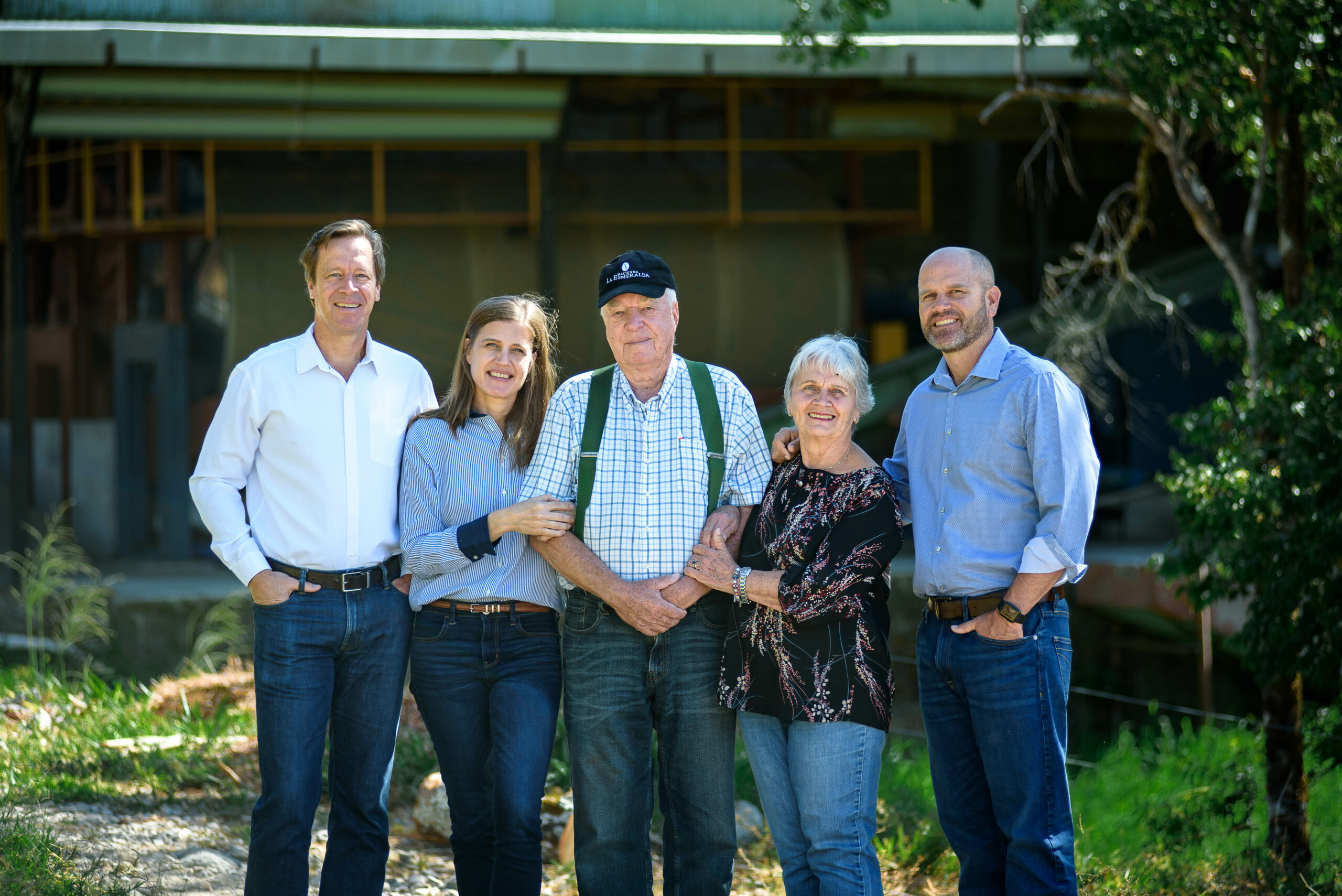 The lands that make up Hacienda La Esmeralda were first brought together as a single estate by a Swede named Hans Elliot in 1940. This land comprised several hundred hectares in what are now the Palmira and Cañas Verdes farms. In 1967, a Swedish- American banker by the name of Rudolph A. Peterson (1904-2003) bought Hacienda La Esmeralda as a retirement venture. At the time, the land was predominantly pasture for beef cattle, with some small smatterings of coffee mixed in.

By 1975 the Petersons had switched the farms over to dairy cattle which performed quite well and continues to make up half of Esmeralda’s farm land today. In the mid- 80s, the family was looking to further diversify and coffee, with its rich production history in the Boquete region, was a perfect opportunity.

Coffee had been growing on lands in and around Hacienda La Esmeralda since at least 1890. It was this huge reservoir of coffee knowledge and culture that helped the Petersons redevelop much of their land for coffee farming and even make their first coffee farm expansion at Palmira in 1988. It bears mentioning that coffee at this time was almost exclusively an undifferentiated, mass-market, endeavor in Panama. It was not until the mid-1990s that some North American coffee buyers started talking about Specialty Coffee widely.

In 1997 the Petersons purchased the land that became the Jaramillo Farm. This plot on the sides of Volcan Baru was selected for its high altitude, in hopes of developing higher scoring, livelier and more nuanced coffees. That said, it was only by serendipity that the famous Geisha coffee was planted on this farm 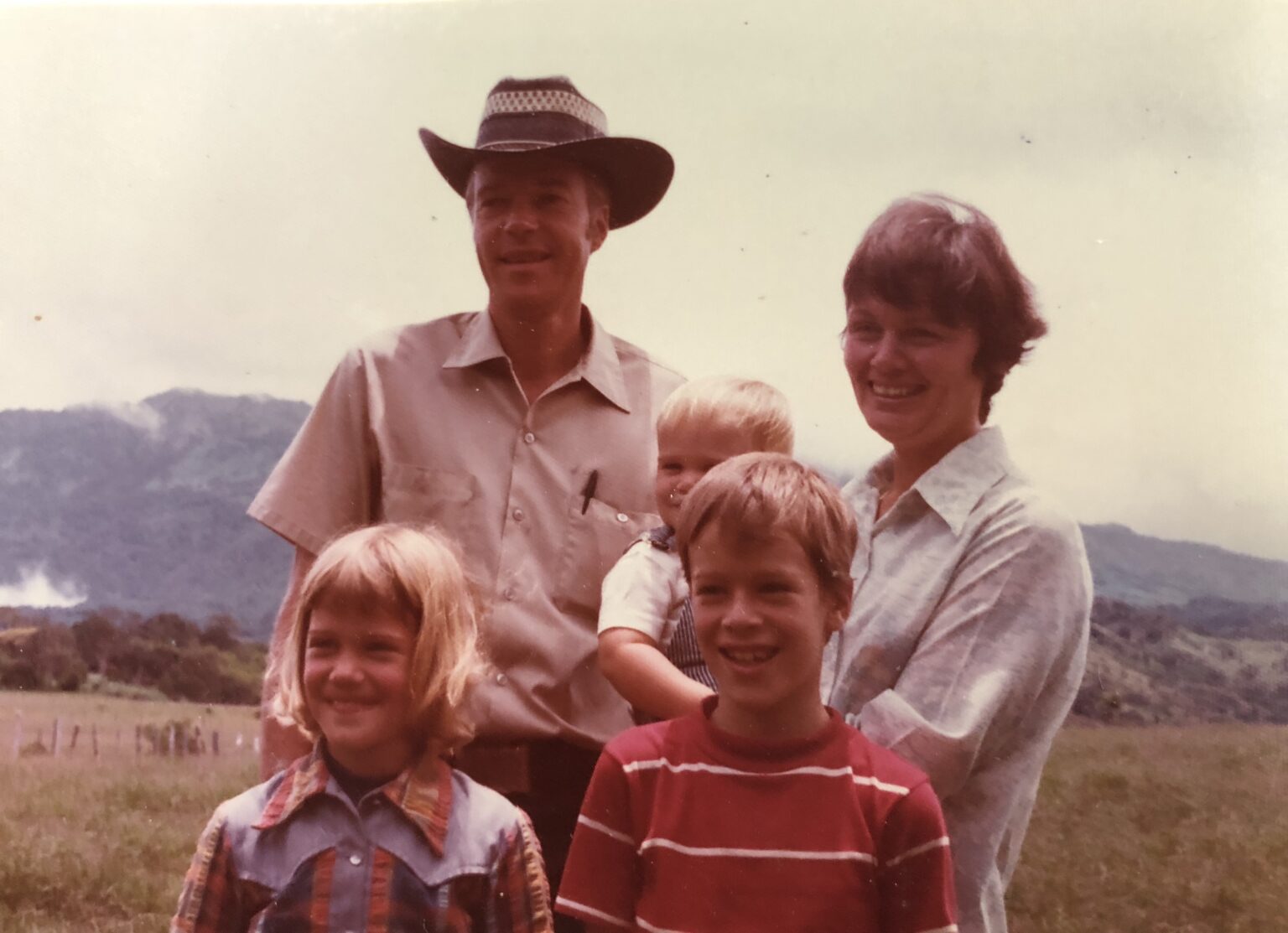 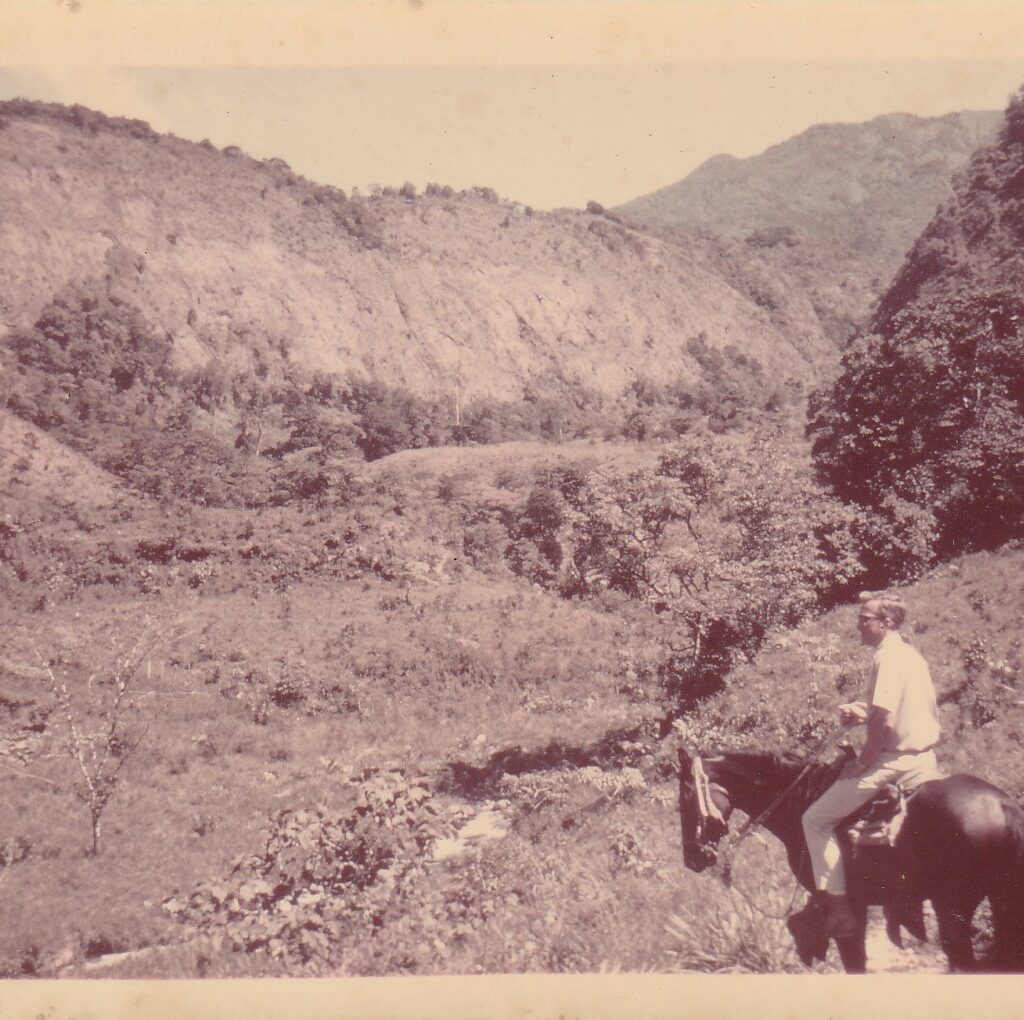 The story of Geisha coffee reaches back to 1936, the time of a British colony in Abyssinia, and Captain Richard Whalley, a Consul for the Bench Maji region, who was tasked with collecting 10 pounds of coffee seeds from the area around Geisha Mountain in what is now Ethiopia. How descendants of these Geisha coffee seeds arrived at Hacienda La Esmeralda, and how their unique flavor expressions were discovered, reflects the complex and at times murky history of the global coffee trade.

Captain Whalley had been tasked with collecting these seeds as part of a census of Ethiopian wild coffee varieties, ordered by the Director of Agriculture in Kenya. The wild forests of Ethiopia are the birthplace of coffee, and this survey was done to assess commercial viability of hundreds of accessions—small, regional mutations in a main coffee variety—for planting in other British colonies. Even in the 1930s, word had reached the coffee traders at markets in the area of the delicious coffees from the Gesha region.

How the area of Gesha, or sometimes Gecha, became referred to as Geisha is unclear, but reports from the time listed this 10 pound sample collected and hand-processed by Captain Whalley as coming from around Geisha Mountain. This moniker stuck as the seeds subsequently traveled to Tanzania and Costa Rica on their way to Hacienda La Esmeralda. The Geisha coffee seeds were exchanged amongst a network of gene-banks and coffee research stations before arriving at CATIE in Costa Rica, where Hacienda La Esmeralda acquired them. At the time no great mention was made of the samples beyond a resistance to «ojo de gallo».

It was Geisha coffee’s resistance to «ojo de gallo» that ultimately brought the seeds to Hacienda La Esmeralda. Coffee had been grown in places on and around Peterson family farms since the 1960s, but it had been variably harvested and maintained, with a large mix of varieties and accessions planted across the farms. In the 1990s, as coffee production became more of the focus, the Petersons acquired a new, high-altitude farm, which they dubbed Jaramillo. The farm had recently been devastated by coffee leaf rust, but Daniel Peterson noticed that the Geisha trees had not been hurt as badly, so they decided to plant Geisha on more parts of the farm, including in sections above 1650 meters above sea level, higher than Geisha had been planted before. 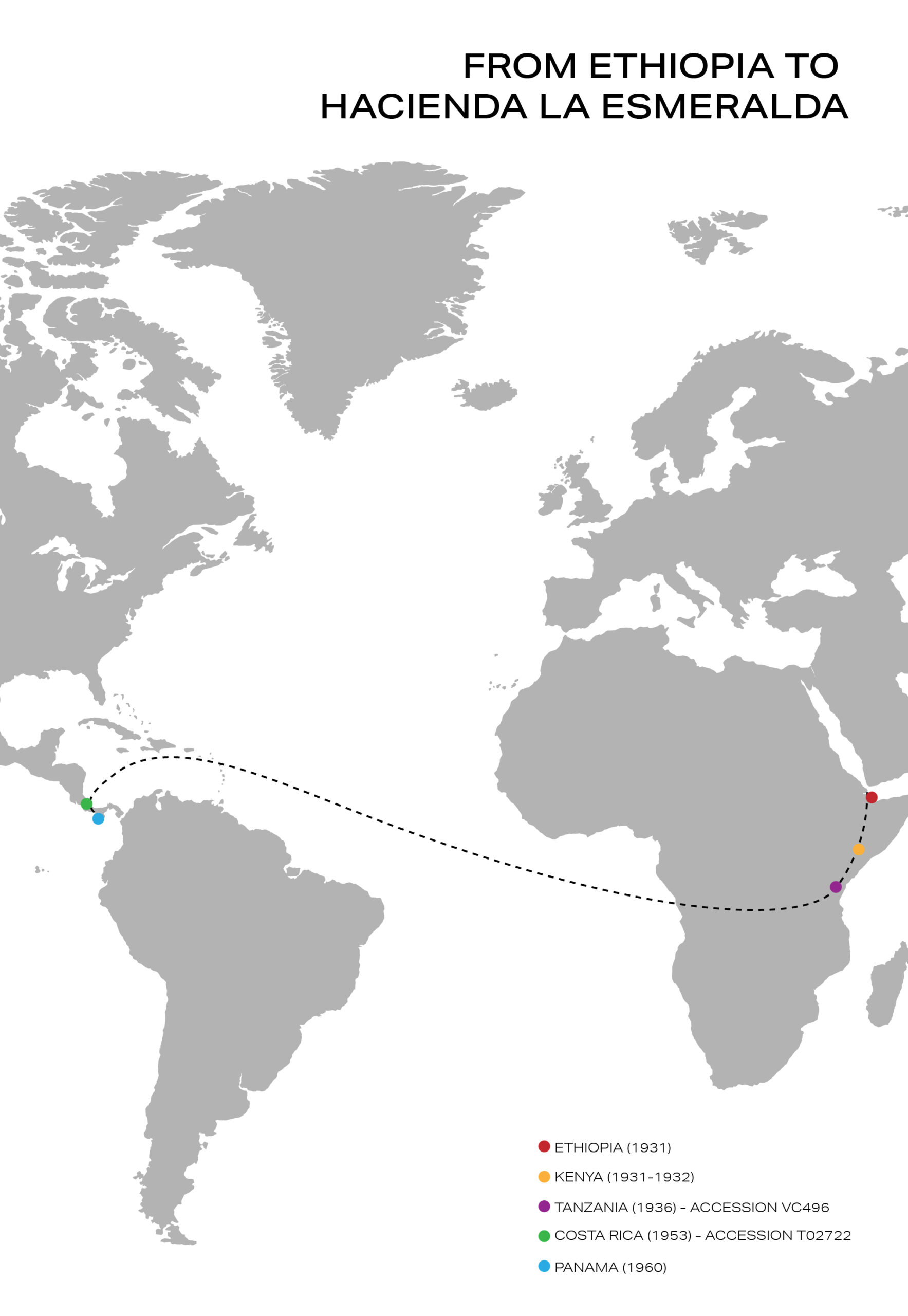 It was this high-altitude planting of Geisha coffee that helped set in motion the events of 2004, when Geisha’s amazing aromatics first became clear. This was in the leadup to the Best of Panama competition, an annual coffee cupping competition and auction that had been gaining significant interest amongst a group of next generation coffee producers in Panama. For that year’s competition, the Petersons did something they had never done before—during processing, they separated production from different areas of the farm into individual lots. One of the lots they separated came from high up in Jaramillo, and when it landed on the cupping table, it blew everyone away.

This was the first time that cuppers had gotten to taste a sample that was 100% Geisha coffee, and when they did, it was clear that Hacienda La Esmeralda had something new on their hands—the explosion of juicy brightness and multi-layered aromatics in a high-altitude Geisha coffee were more reminiscent of a coffee from Ethiopia then Latin America. Once the initial shock was processed, the cuppers couldn’t get enough of it. Hacienda La Esmeralda went on to win the 2004 Best of Panama competition with their Geisha coffee, and that year set a record for the highest price ever paid for a coffee at auction. 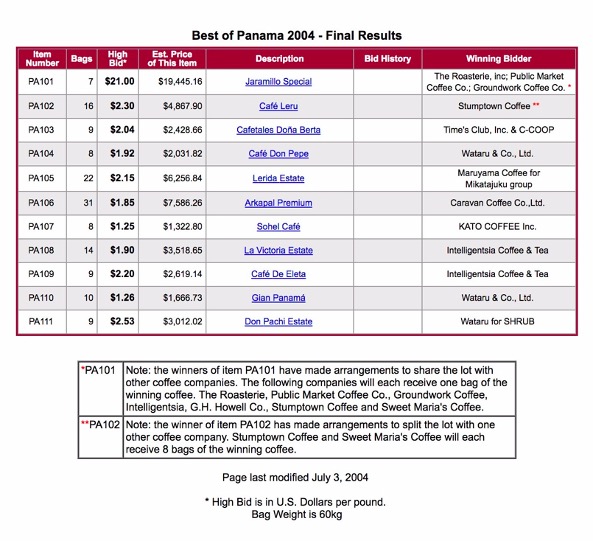 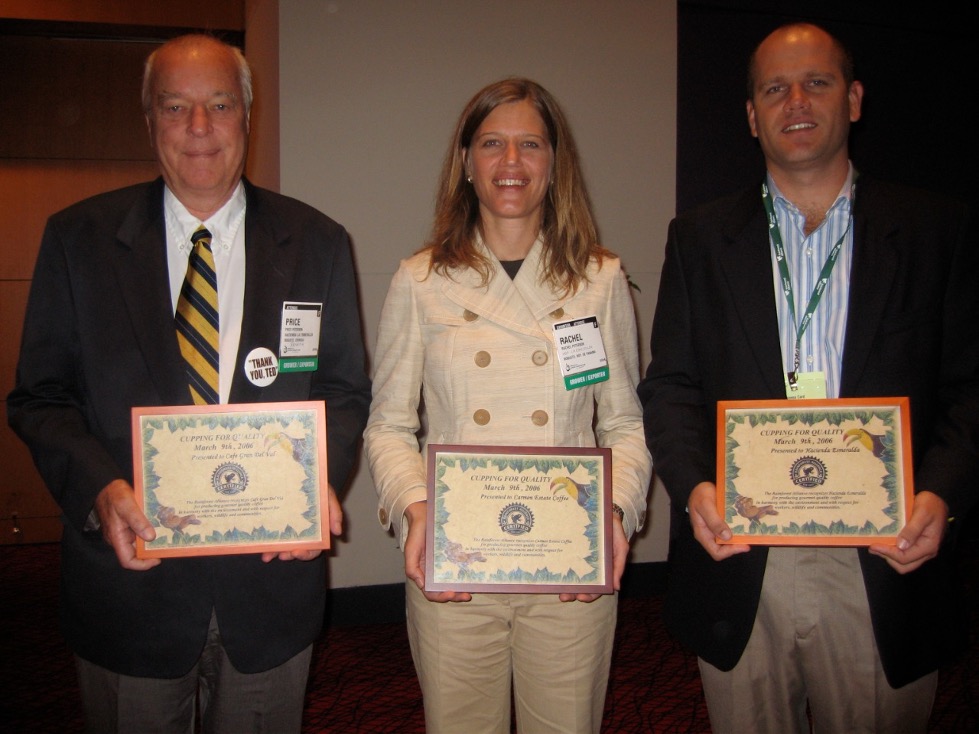 After the events of 2004 and Geisha’s official coming out at the Best of Panama Auction, much of the Peterson’s focus settled on developing an infrastructure to support superior lot separation, meticulous processing, and a healthy auction format. As auction prices grew and grew, so did the demand for experiments like Natural Processing, and for increasing specificity in lots.

Delivering on this infrastructure allowed Hacienda La Esmeralda to look to the future with confidence, and in 2007 the Petersons began a decade-long research project into coffee varieties. Over 400 different accessions (or sub-varieties) have been planted in the high altitudes of El Velo..

It was a coincidence of altitude and lot separation that discovered Geisha’s amazing flavors and aromatics. The hope is that by carefully planting a high altitude environment with many seeds, including some from the same germbanks from which Geisha originated, other interesting and exciting combinations of variety and microclimate may be found. While Geisha coffee has captured our hearts here at Hacienda La Esmeralda and the world over, who knows what coffee might be the next great bean? 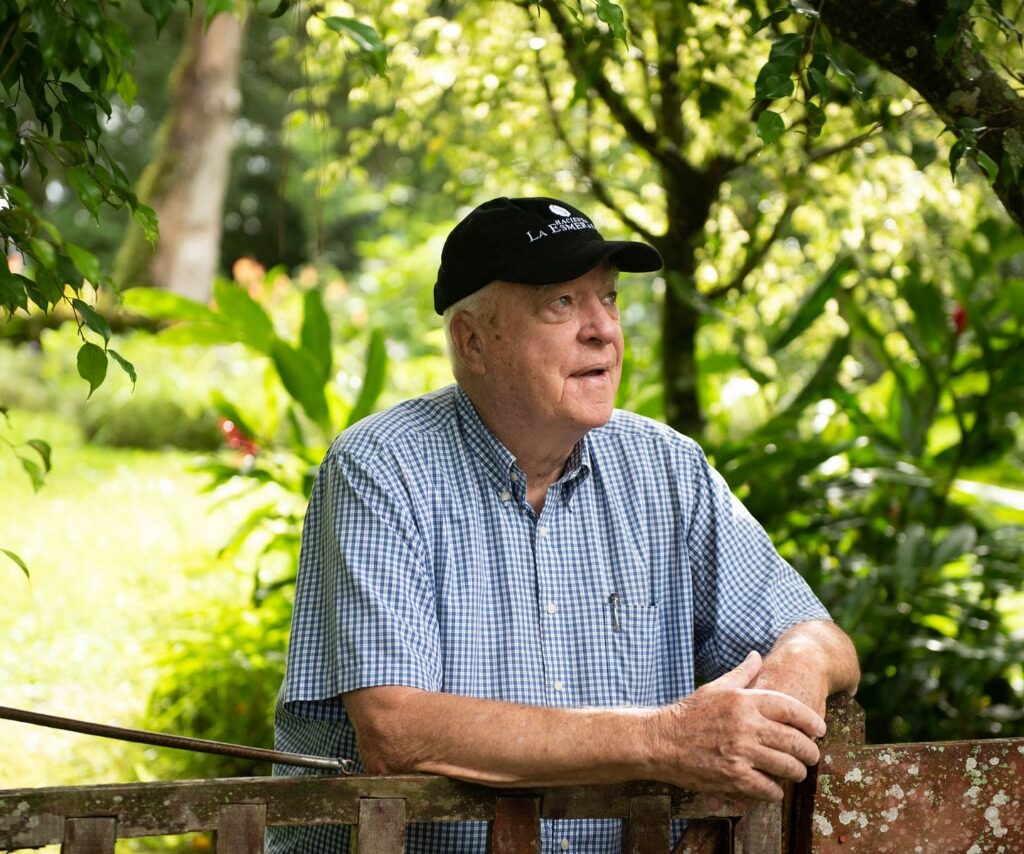 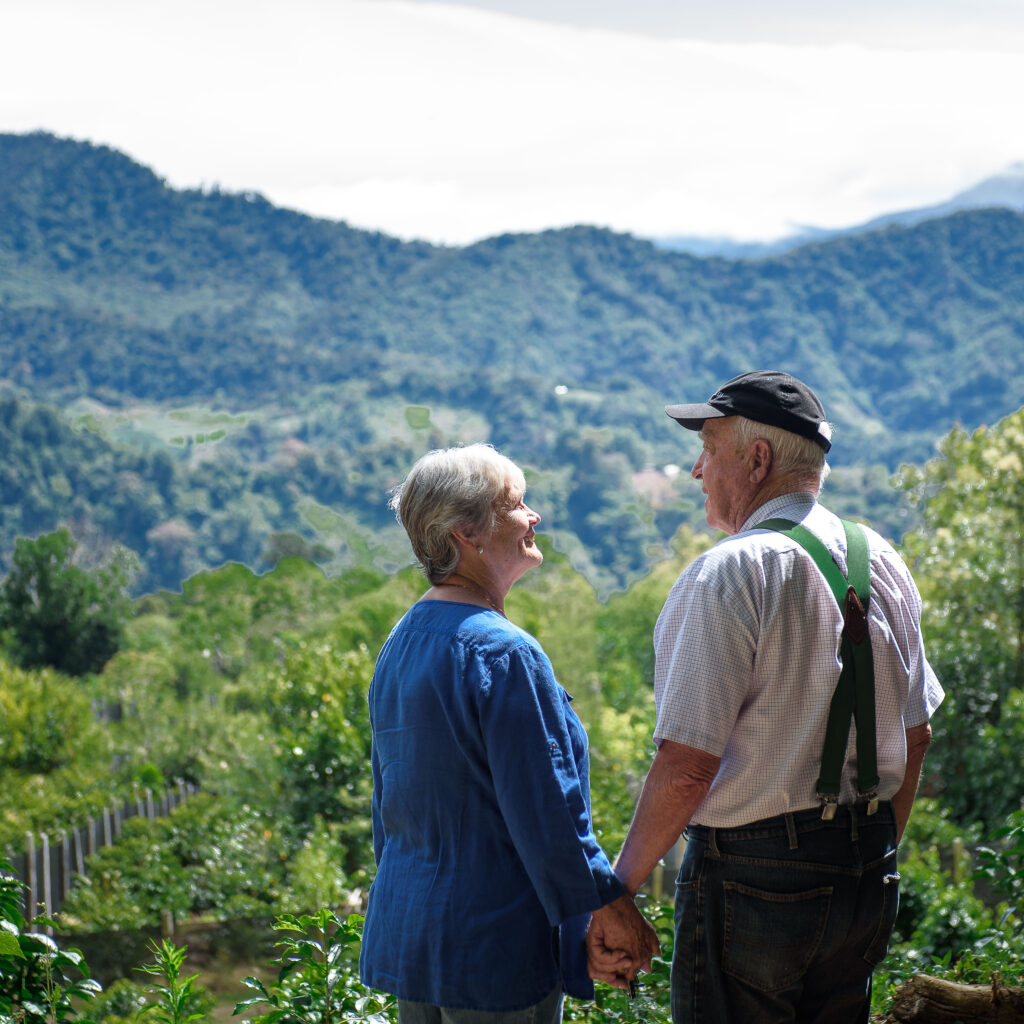